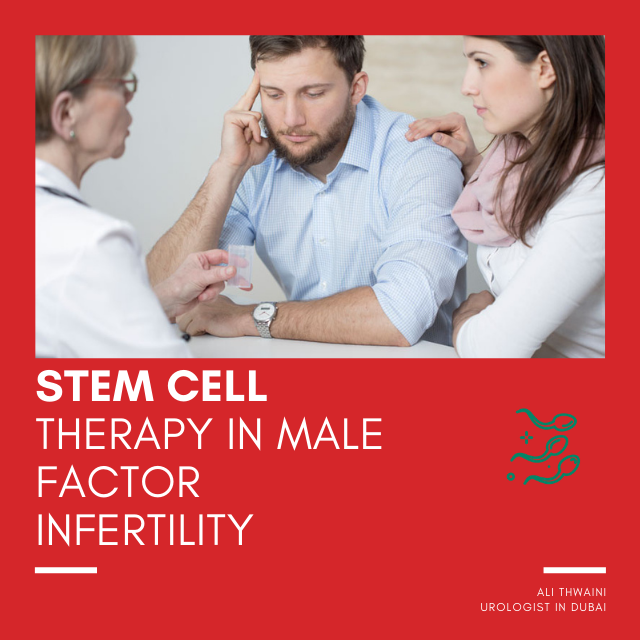 More than 10% of couples in the world experience fertility problems. Infertility, defined as failure to conceive a clinically detectable pregnancy after >12 months of unprotected intercourse, is a common condition, reported by 1 in 6 couples.

Due to their abundant source and high differentiation potential, stem cells are considered as potential new therapeutic agents for the treatment of infertility. Stem cells could be stimulated in vitro to multiply and then are utilized in vivo to “awaken’ the dormant spermatogonia” and are theoretically a potential source to develop various numbers of specialized cells including male and female gametes suggesting their potential use in reproductive medicine. During the past few years, considerable progress in the derivation of male germ cells from pluripotent stem cells has been made. In addition, stem cell-based strategies for ovarian regeneration and oocyte production have been proposed as future clinical therapies for treating infertility in women.

There are several sources for stem cells: Embryonic-derived stem cells (ESC), extra-embryonic derived SC, and mesenchymal derived SC. Each has their advantages and disadvantages. In this contest of male factor infertility, another source of stem cells could exit, albeit, a sparse source; this is derived from autologous Spermatogonial stem cells. Whilst harvesting them is a relatively simple procedure at an outpatient setting, and there are no ethical nor moral issues with harvesting them, they are relatively small numbers in the testis; hence, extracting them would be rather difficult and it is challenging to be maintained in culture. Moreover, there is a risk of immune rejection.

Besides genetic factors, azoospermia also occurs due to injuries, exposure to toxicants, immune-suppressive and anticancer treatments. However, a large proportion of infertile males are diagnosed as idiopathic with unknown causes, reflecting poor understanding of the mechanisms regulating spermatogenesis and sperm function in humans.
While several sources exit to cultivate and improve stem cells for particular functions, generating pluripotent stem cells that have the potential to differentiate and undergo mitosis followed by meiosis into haploid cells remains challenging.
There have been few animal studies (particularly mice) where autologous mouse induced plutipotent cells have been produced (miPSC). Those actually were cultivated into mature spermatogonia and early spermatids. However, only a few studies made successful in producing spermatozoa in mice. This is yet to extrapolate and translate into human trials.

However, there are few human trials where a successful culture of hiPSC was achieved, resulting in spermatogonia and few spermatids.

These can be derived from either embryo of the placenta (the former might have ethical problems and both might be associated with future, though minor, risks of mutations). Other cells are derived from adult bone marrow and fat cells, which are rich in stem cells.
The function of stem cells in male factor infertility can be divided into three possible functions:

There are several ways of retrieving SSC, simply shown I the figure below:

Flow chart showing different pathways of potential utilization of stem cells into spermatozoa. (Left) Somatic cells may be de-differentiated into induced pluripotent stem cells (iPSCs), and then re-programmed to differentiate through germ cell lineage via transplantation into the testis seminiferous tubules, xenografting or germline stem cells in culture. (Right) SSCs may be harvested from the testis and kept as a tissue biopsy or processed into a single cell suspension. The tissue biopsy may be treated as an organ culture, autologous graft or xenograft to proliferate and differentiate SSCs to spermatozoa. Cell suspensions may be grown in culture and xenografted, autotransplanted into the testis seminiferous tubules, or differentiated in culture to harvest spermatozoa. (m) TESE, (microdissection) testicular sperm extraction.

The first phase is stem cell harvest and preparation: this involves collecting adipose-derived stem cells from accessible parts of the patients. Traditionally, adipose cells are abundant in the abdominal fat and upper thigh. This would provide the MSC that are required for mechanisms 2-5. This would be mainly helpful for men with severe oligo-asthenospermia. They are able to produce sperms albeit in sub-fertile quality and quantity.
For men who are azospermic; in addition to the above, SSC harvest is aimed from testicular biopsy (attempted at the same time) with the aim of extracting SSC for culture.

After proper patient counseling and office preparation, under aseptic technique, diluted local anesthetic with adrenaline is infiltrated into the abdominal wall on both sides. Then we allow approximately 15 minutes for the local anesthetic to work. Afterward, we harvest the abdominal fat utilizing a special fat harvest micro needle, which is well tolerated by the patients. After achieving the desired amount of the abdominal fat, it is transferred to the Stem Cell laboratory for purification and culture purposes; a process that usually takes between two to three weeks.

For azospermic men, testicular biopsy is carried out simultaneously and SSC is sent to the lab as above.

Patients are normally well enough to go home on the same day. Patients is normally counseled for the possibility of minor discomfort and bruising in the abdominal wall (and thighs, if they were utilized for the fat harvest, in thin patients).

This procedure is normally carried out as a Day Case under general anaesthesia. It normally takes less than an hour. After revering from the anaesthetic, the patient is normally sent home with minimal analgesics.

We aim to prospectively recruit male patients with primary infertility and have a primary testicular failure (severe oligospermia or azoospermia) and include them in the above trial.

We aim to recruit a minimum number of 30 patients.

After consent, men will enter the above trial, that includes the following: